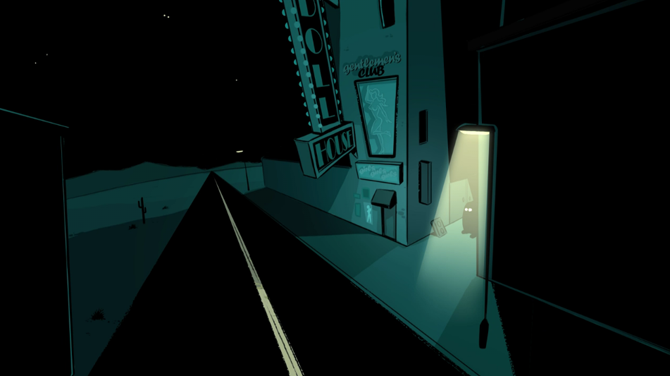 Little Quentin is an animated short film directed by Albert ‘t Hooft & Paco Vink from Anikey Studios, a young animation sutdio founded in Netherlands in 2007. This film was produced by Il Luster Productions.

A dark universe, full a personality with old fashion disproportions and really elaborate characters mix (humans or animals) which we understand the link only after a surprising turnaround. A rare style and a truely imaginative scenario. To follow, the short and the interview of Paco Vink.

Interview / Some questions to Paco Vink :

Albert ‘t and you are the creators of Anikey Studios and directors on the awesome animated short, Little Quentin.

First, how began the adventure of Anikey ?

We started our studio Anikey about 5 years ago. Back then we were both still freelance artists and decided to join forces to realize a project Albert started as his graduation project.
It was an animated short film called ‘Paul & the Dragon’, a story based on a real boy who, at the age of 10, finds out he has cancer. In the film Paul’s doctor explains to him the cancer is like a dragon that’s eating the forest around him. This 25 minute film really marked the beginning of our studio and during the production of this first film we also set up the idea for our second short film ‘Little Quentin’. ( More info on our first film: paulandthedragon.com ) 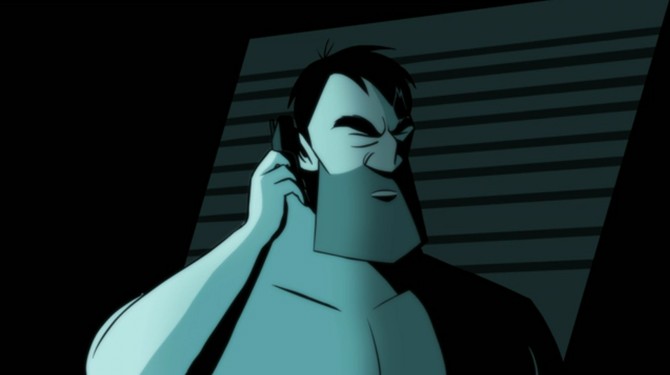 What was the aim of this last animation ? The motivation ?

The idea for the film was basically a spin off from the opening scene from our first film ‘Paul and the Dragon’.
That film opens with a scene where the main character, a kid, is playing with his toys and we see the toy characters come alive in his imagination.
A knight seems ready to charge a dragon with his sword, only to step into a Ferrari with, sitting in the passenger’s seat, a big fat bunny, barely fitting in the car.
We thought this absurd image was so funny we wanted to do something of a spin off with these characters.
When we started brainstorming about it, we realized children playing with toys can sometimes be really cruel. I remember as a kid, at my sister’s birthday for example a couple of boys ripped the clothes of barbie dolls before joyfully beheading them. Then we started thinking of what a disturbed toy’s universe would look like in the mind a of a young film director. So there’s a little nod to Quentin Tarantino in the title there. We saw the chance after our first colorful children’s film to do something really different; a dark twisted film (not meant for kids) and have a lot of fun in this mysterious film noir setting. We decided to present the idea to Michiel Snijders and Arnoud Rijken, from animation production house il Luster, who really liked the idea and helped us pitch it to the Netherlands Film Fund. 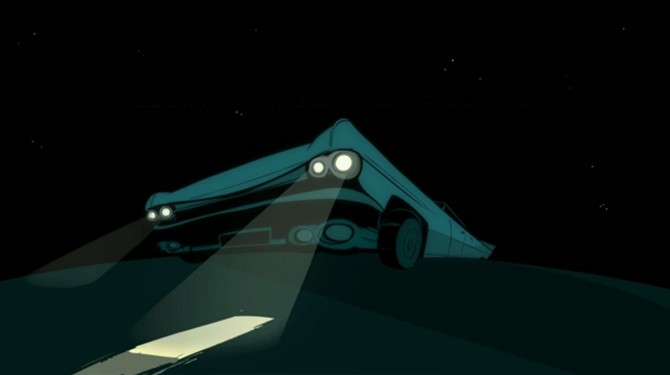 How many people worked on this project ? Is it the same team you worked with on your others productions ?

We worked with a relatively small animation team on this film; about 4 to 5 people.
Animators Jelle Brunt and David de Rooij helped us a lot with the animation, but as they were still in the process of graduating, they had to move on during the production to work on their own film ‘Slim Pickings, Fat Chances‘. (Which turned out to be a really funny classic cartoon, an homage really, to the great animation directors from the Golden Age, like Tex Avery and Chuck Jones).
The second half of the production we were joined by animator Yi Zhao who did some great work on animating some of the shadows. He ended up with the nickname Shadowmaster. We now still work with Jelle and David on different projects and want to keep doing that in the future as we hope to expand a little bit with our studio.

How it is to lead all these people ? and what was your specific role ?

There was a bit of improvising here and there, which was possible because we were such a small team.
But we could work quite fast, because we had a very clear animatic for the film. We basically finished the animation in 8-9 months (from November 2008 to July 2009).
Albert and me direct the scenes. I did the background layouts, animation keyframes and oversee the art direction. Albert handled the special effects, final compositing and editing of the film. David, Jelle and Yi were great animators to work with so we would divide the shots between each other. The budget was a bit tight, so it really required some limited animation at some points in the film, but fortunately it works really well for this short and the animators picked up the style really well. 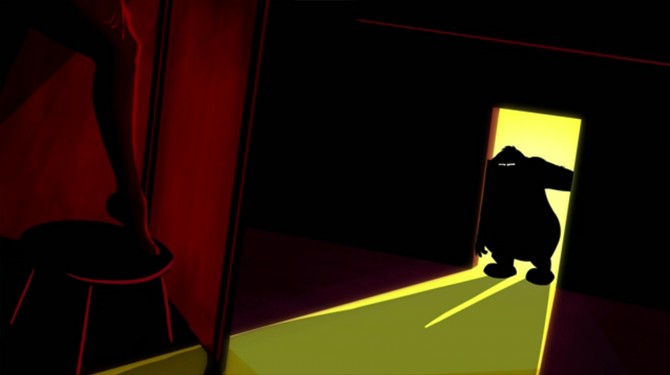 Can you tell me some inspiration sources for this dark universe of Little Quentin ?
Our biggest inspiration will always be the directors from the Golden Age of animation, like Tex Avery, Chuck Jones and Bob Clampett.
But ‘Little Quentin’ really has a lot of different influences, like Bruce Timm (Batman), Jamie Hewlett (Gorillaz) and of course Frank Miller (Sin City) and live action movie directors like David Lynch (Twin Peaks, Lost Highway), the Coen Brothers (No Country for Old Men) and Hitchcock (Vertigo).

The atmosphere, the characters, the sound design, … everything is deeply worked on the animation. Can you briefly describe the process of creation for a project like this ? Do you have some sketches, artworks or anything who shows the relfexions and evolutions ?

We started with a short script and a very simple rough storyboard, sketching out the ideas.
You can see some early concept art of the characters here : 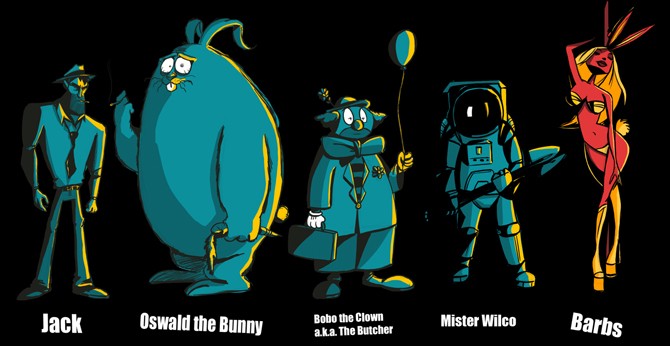 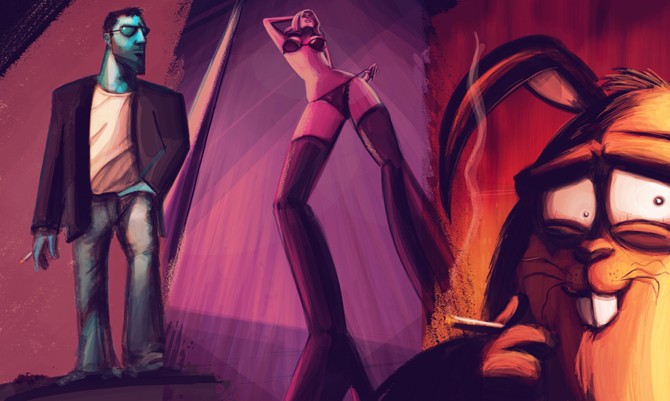 Then we would make a moving storyboard or animatic, to really get a good sense of the pacing and timing of the film.
This animatic we used to pitch the film to the Netherlands Film Fund. Originally the film would end with the reveal of the kids in the room, but it felt kinda rushed and didn’t really gave a fulfilling ending for the main characters. So we struggled a bit with that and decided it would be fun if the girl would take over the toy world and surprisingly enough, it would get even more disturbing for our main characters. If we had a bit more time and budget we probably would’ve tightened up the ending a bit better.
While finishing up the animation and background art, composer Maarten Spruijt, who also did the soundtrack for ‘Paul and the Dragon’, started writing the score, working with a rough edit.
Maarten’s work was right on the money. With just a few notes from us he managed to create the exact right atmosphere we wanted for this short.
When the film was almost completely done we recorded the sound effects and foley sounds at Bob Kommer Sound studios, who we also worked with on ‘Paul and the Dragon’ and did another excellent job on this film. 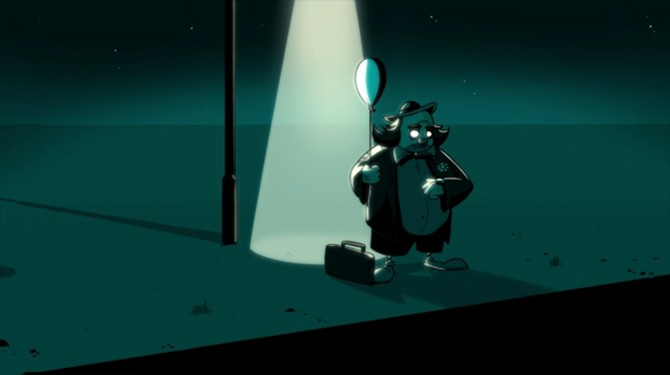 We have no idea. Moving on to new projects, we actually had forgotten a little bit about the film, while it was doing its run around the film festivals.
Then we decided to finally put it online and we got great response as it got picked up by a lot of websites.
I guess the story keeps your attention and kinda keeps you guessing what the hell is going on with this ragtag team of characters. 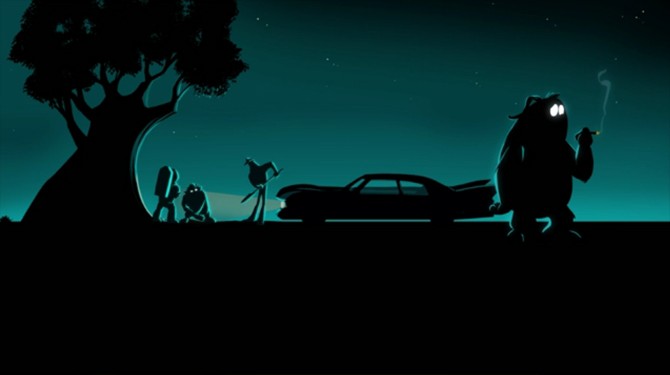 What are your plans for the future, another wonderful short in progress maybe ?

Right now we have a number of projects in the pipeline.
We are in the process of finishing another short film, ‘Fallin’ Floyd’, which is about a man whose depression takes shape into a little black demon. More about this project on our blog.
And we just released an interactive storybook for the iPad, based on the fairy tale ‘Hansel and Gretel’, in the App Store, aimed at children and adults : epictales.com
Hopefully this will be the first of a series.
Later this year we are starting development on a feature film called ‘Trippel Trappel’. A cute children’s film which is about a bunch of animals who go on a journey to celebrate St.Nicholas, the Dutch version of Santa Claus. Finally we also want to release our first film ‘Paul and the Dragon’ online, with hopes that viewers will donate money to institutions helping families with members suffering from cancer. We’d love to do some sort of sequel to ‘Little Quentin’ someday, because it is such a fun world to work with and we have some ideas, so who knows.
Right now we are really enjoying working on such diverse projects.

And finally (if its not indiscreet ^^), what are you going to do today ?
Probably feed the bunnies and take them to a stripclub.

I really want to thank you a lot for your great answers and congratulate you and all the team of Anikey studios for your fantastic work ! 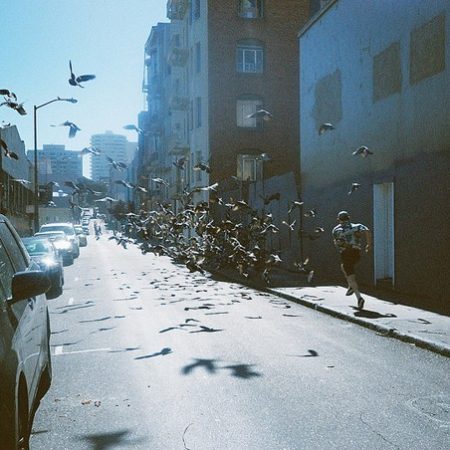 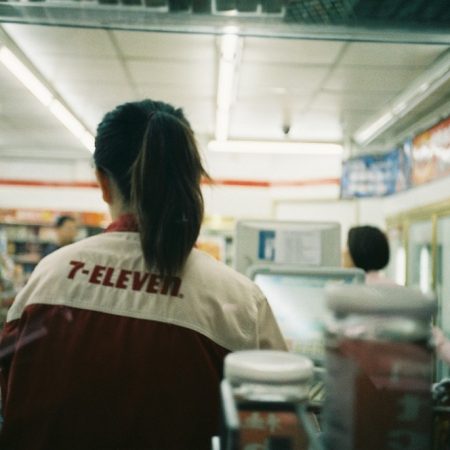 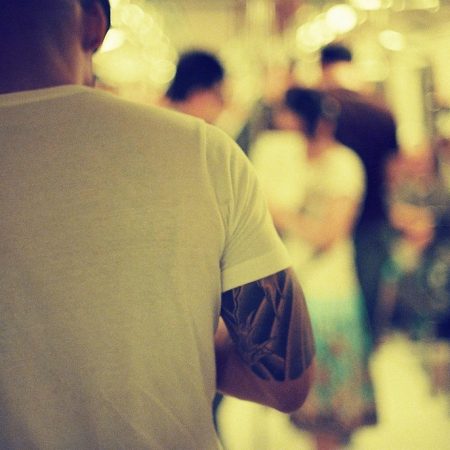 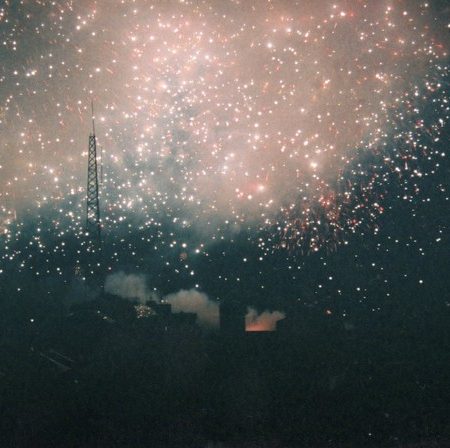 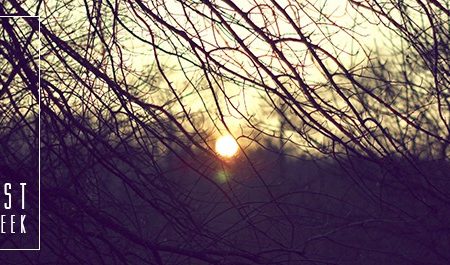 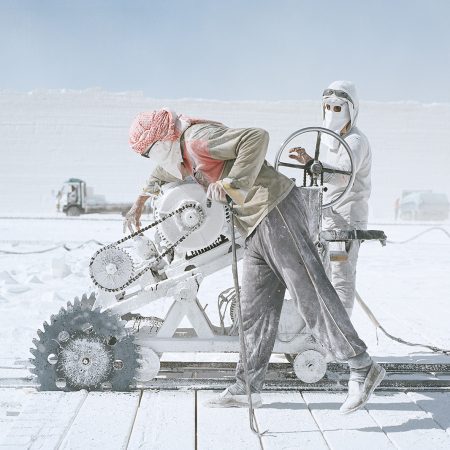 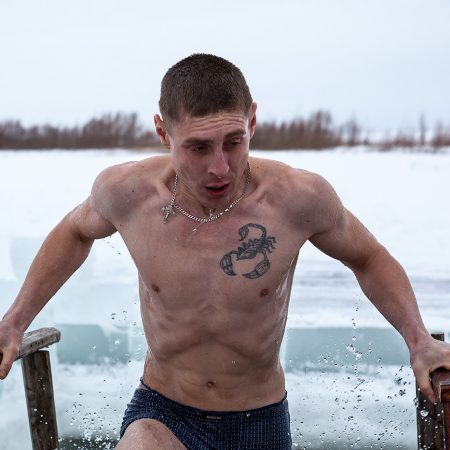 Photodocumentaries of odd traditions and surreal places around the world 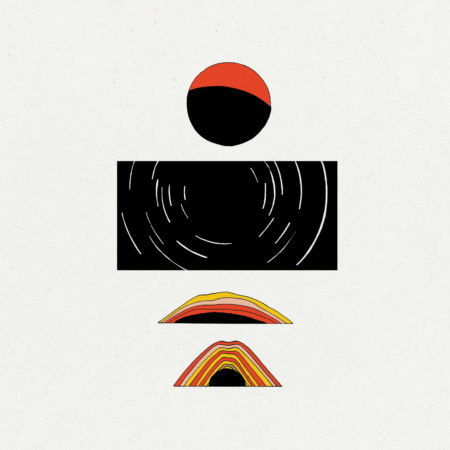 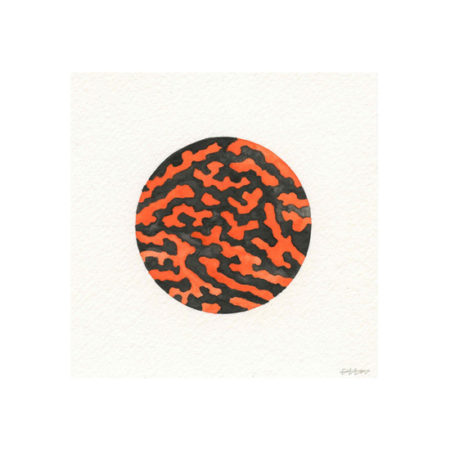 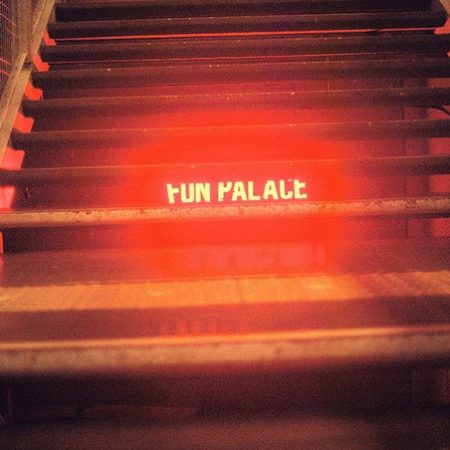 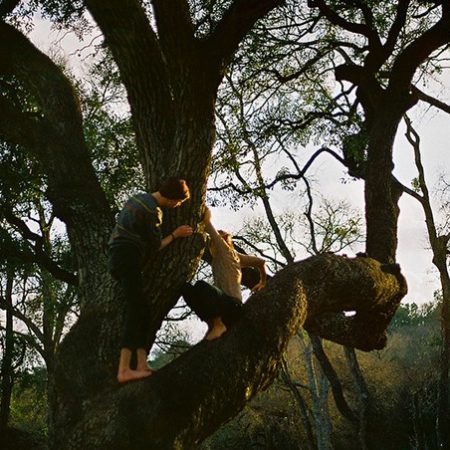 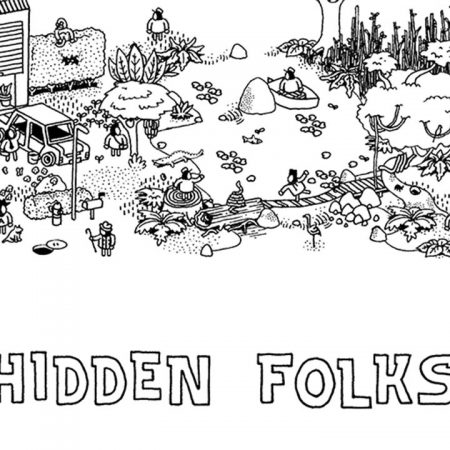 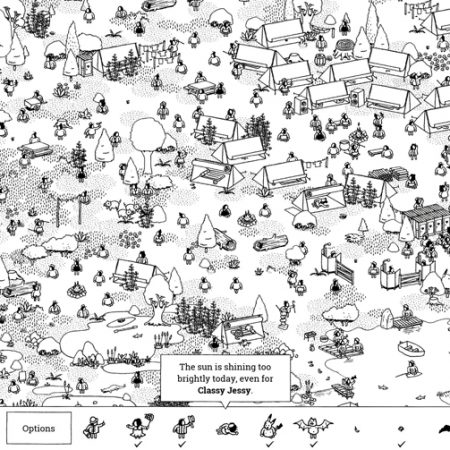 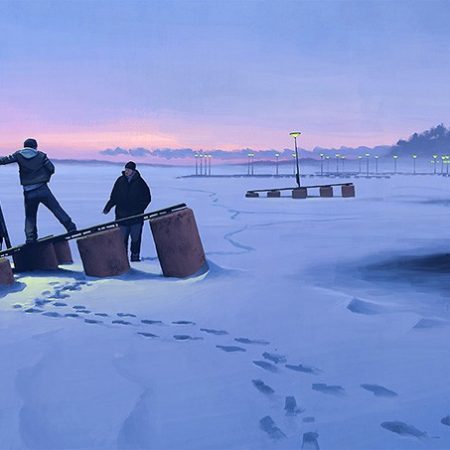 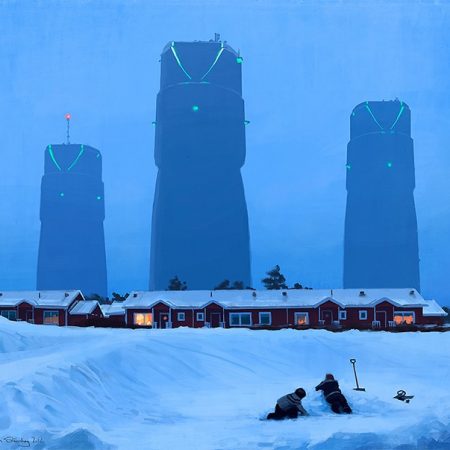 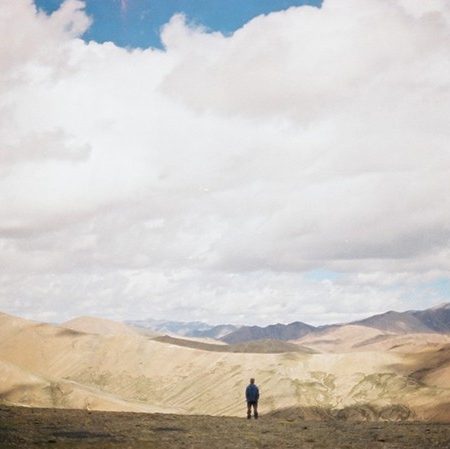